The Power of One

When my son, Liam, was diagnosed with autism at age two, my heart sank.  We were told he would likely never speak and probably would require an institutional setting. Confused, with no idea how to help him, I was angry. One particular night about three weeks after the revelation of this new path for our life, a serious conversation with God broke out in my kitchen. Well, I yelled at Him at the top of my lungs, including all the bad words I am ashamed to say, until I had no more strength to stand. 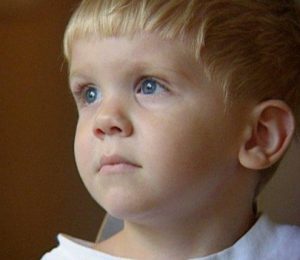 As my worn-out head hit the pillow that night, all I could remember was the Holy Spirit will help you when do not have the first clue how to even pray. I had yelled. He comforted me anyway. I asked for help. He immediately helped me remember a mom praying for a child and vowing service to God.

My prayer was simple:

“Hi. I am sorry for all that and especially the bad words. Would you please help me get my son back from this? Would you please tell us what to do because we will do whatever You say to do? Thank you.”

Then I fell into a deep sleep because fighting God is exhausting.

The next morning, I woke up with a jolt from a dream, exclaiming, “We are supposed to start an organization and have a march in Washington!” Over coffee, I wrote down all the thoughts pouring out. We had no idea how to start a non-profit, much less run one, but believed in faith that His answers would come. We did not even know anyone in the autism community – yet.

Nine months later, on February 15, 1999, Nancy Cale, Jeana Smith, and I birthed Unlocking Autism with our Open Your Eyes project designed to raise awareness about life with ASD. Letters and donations started pouring in across the country. Soon after, we connected with Autism Resource Konnection (ARK), likeminded people coordinating a rally in Washington, DC called Hear Their Silence. All of us ordinary people determined to do this for our little ones we loved so much.

In April 2000, over 5000 people in the ASD community came to Washington, DC.  On April 6, Jeana and I testified before the United States Congress House Committee on Oversight & Government Reform, chaired by Congressman Dan Burton. We were joined by other parents, government officials, researchers, and physicians. The Hear Their Silence rally was held on April 8.

The next year, UA returned to DC, uniting many autism organizations with The Power of One in 2001 – a conference training individuals in legislative advocacy and another rally on the Hill.  In April of 2002, The Power of One was back – this time rallying in the pouring down rain, but dancing in it with a great new band. Our own Autism Woodstock.

We took a break in 2003 but returned to rally in 2004 with The Power of One again. This time, Liam read his read his first speech right there in front of Congressmen and Dan Marino from a stage in front of the United States Capitol while 5 rows of our Open Your Eyes banners each a football field long lay on the grass in front of him. In 2005, The Power of One rally returned to cover Capitol Hill with a small, but determined and efficient army.

Then, we went dark. For a decade. Silenced.

He answered, “Those were rallies. Not a march. I told you to march.”

Dumbfounded I said, “Well – that is astonishingly and precisely correct.  You did say to march! They did not rally at Jericho, they marched. My bad. How am I supposed to do this? You know I’ve asked the company I work for to do one every year. They always say no.”

I said, “They will probably fire me for that even though they know I still have UA.”

Silence as He left the conversation.

Being brave is moving forward even when you are scared. Liam says that all the time. I prayed more. And I journaled what I asked, what I studied about, what His responses were. I found people to pray and fast with me. The answers came. We launched the march. True to His word back in April 2015, my employment was terminated a few days later.

Also true to His word, it was ok!

I wasn’t upset and apologized if I had upset anyone. I just knew He had called me to do this, because of what I had promised Him. I had made a vow to Him that sad night back in 1998. He was good and faithful to keep His word, restoring our family.

It was my time to be faithful to Him.

On April 1, 2016 – still terrified of what could happen since horrific life-changing events designed to deter us seemed to follow every event in DC, I asked a friend of mine to walk beside me to bless the route the day before the march. When David brought the Ark of the Covenant back, he made a sacrifice every six steps. The bulls of our lips with a sacrifice of praise would have to do!   We had a plan.

Starting at the United States Capitol, we repeatedly counted off six steps – 1, 2, 3, 4, 5, 6 – then, paused to read Scripture, pray, sing – any of those combinations.  We were determined—even stood in traffic intersections with cars going around us!

It took us over five hours. Sunburned by the time we got to the White House, our incredibly healing afternoon was spent repenting ourselves, for our people, for our community, for this nation, and the world as we prayed for His healing, mercy, justice, grace, answers, breakthrough.

On April 2, 2016, 120 people from 19 states gathered to praise God in song and worship. We sat and listened to our children, who were never supposed to speak, take the stage to tell us how they thought we should see the world and the kind of world they envisioned.  We listened to moms and dads who spoke on behalf of their families. Then all of us marched down Pennsylvania Avenue to the Ellipse in front of the White House, concluding the event by singing the U2 version of Psalm 40. 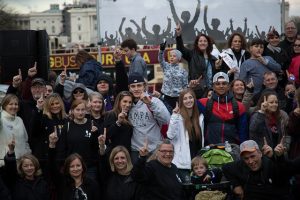 “I waited patiently for the Lord, who inclined and heard my cry. He lifted me up out of the pit. He set my feet upon a Rock and made my footsteps firm. Many will see and fear.  How long, Oh LORD, to sing this song? How long?” 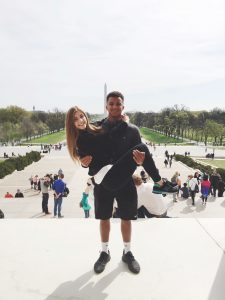 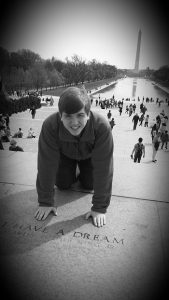 On the morning of April 4, our family headed to the Lincoln Memorial. Everyone in our family loves Martin Luther King, Jr. and his message (which is God’s message) of love and unity. When we reached the top of the steps, my daughter Mairin and her sweet boyfriend Abel snapped a picture.

Then, Liam saw the spot where Dr. King stood giving his “I Have a Dream” speech that hot day in August 1963.  He knelt down, put his hands on the spot, looked up at me and said,

“Mom, I have a dream for everyone to be kind and loving.“

In October 2017, I returned to Washington, DC with Mika Bradford to advocate on Capitol Hill for a few days and attend the Awaken the Dawn event. At the Sunday Service held at the Martin Luther King, Jr. Memorial, we met Pastor Arthur Hunt from Arkansas. His gathering was called “The Power of One-ness.” We connected with him again almost exactly one year later and have partnered with each other ever since.

On January 21, 2019, our UA Prayer Warrior team helped Pastor Hunt launch his Cleanse project, the reading of God’s entire Word over America with intercessory prayer in each state between sunrise on the East Coast and sunset in Hawaii.  We have participated in this project faithfully for the last two years.  Pastor Hunt has wholeheartedly supported our efforts with Unlocking Autism and provided valuable pastoral counsel along the way as well.

Where we have sowed in tears for 21 years, we will now reap in joy.

On April 3 & 4, 2021, Pastor Hunt will hold another event in DC and Unlocking Autism is partnering with him this time for: The Power of One JUST GOD. The 7th Cleanse project will take place at the same time. We hope you can join us in DC or participate back home in your state – in unity either way. We believe that this event will be incredibly special, bearing fruit together exactly five years to the day of our event in 2016.

Just God can do that!

We know what we have prayed with these dedicated moms since the start of our journey, and even more so since the fall of 2015. We know He has heard us, taught us, and trained us for war to pull down strongholds and throw mountains into the sea – His way using the weapons of His warfare – love, shalom, and unity.

We overcome by the blood of the Lamb and the word of our testimony.  No one else can make your testimony for you. You own it – for better or for worse. Our testimony is that He has faithfully made beauty from ashes in our lives more times than I can count. Despite our rocky first really big serious talk, and by the way I do NOT recommend yelling at Him ever, His mercy and grace were sufficient to heal the hurts, the lies, the false futures that were predicted and then restore His truths, His justice, and His shalom over time. 23 years later when someone asks how we did it, all we can say is……

From the beginning of this journey He heard our hearts cry out, opened our eyes to see Him at work in our lives, demonstrated His power of One to us, and is now helping us assemble the “peaces” of the puzzle which increase our faith and hope in the future that He has prepared for each one of our families – because He is the only One who has ever known the plans that He has for us, for good and not evil, for such a time as this.

Nancy and Jeana, along with many other people in the ASD community we loved so much, have passed away throughout the last two and a half decades, but their love remains for our families and our community.

Unlocking Autism was planted in our hearts with a small mustard seed of faith—and we did things based on that faith in Him, even when we could not see or fully understand what we were doing, or sometimes why we were doing it that way. Sometimes we were wild. Eventually, we were faithful. We were a little different from the beginning—but the whole time, He has gone before us, guided our steps, and watched our backs. The Power of One Just God is found in Hebrews 11:1 – “Now faith is the substance of things hoped for, the evidence of things not seen.”

Hope held us there and did not let go.

Now that our spiritual sight can see His fingerprints that wove our past – we cannot wait to Open Our Eyes to see what He will do next.